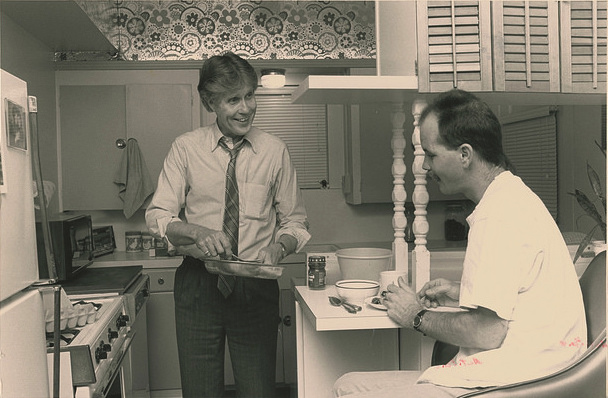 The misfortune of one young man led to the creation of the Care Team® concept and method of congregation-based, shared, coordinated, and supervised volunteer caregiving that is the heart of Interfaith CarePartners. Jay’s call to Earl Shelp, Ph.D. in April, 1985 begins our story.

Dr. Shelp had returned from a visiting professorship at Dartmouth College to his teaching duties in the Texas Medical Center when the phone rang. His research assistant who was a Ph.D. candidate at Rice University frighteningly asked, “Can you take me to Hermann Hospital? The campus doctor thinks I have AIDS.”

Shelp soon realized that Jay’s disease would cause him to be increasingly dependent on others for daily tasks, isolate him socially due to rampant fear and public stigma, and, finally, prematurely end his life. Shelp and his pastoral care colleague, Ron Sunderland, Ed.D., promised Jay that they would share his journey and support him as they could.

To prepare for what was ahead, Shelp and Sunderland spent time at the AIDS clinic at M. D. Anderson Hospital to learn about and meet people with the disease. Many had no one who cared about or for them. They struggled to live with dignity and typically died alone. High profile clergy declared that ‘they’ deserved their fate. Shelp and Sunderland viewed people with AIDS differently.

They understood illness, regardless of its name, as a claim upon the compassion of God’s people. People in the clinic had intense needs for basic assistance. They longed for a comforting embrace. They were like the vulnerable widows, orphans, outcasts, and aliens (the ‘poor’) whose cause was championed by Israel’s prophets and Jesus. Shelp and Sunderland believed that the place for God’s people during the AIDS epidemic was to be with these ‘poor,’ not apart from them.

They recruited friends to join them in caring for people with AIDS. Known as the ‘Mission Squad,’ these friends were the ‘Care Team’ prototype who coordinated their time with and support of people from the clinic who were dying. Shelp and Sunderland asked clergy to let them educate their congregations about AIDS and the opportunities for compassionate ministry created by the epidemic. Beginning in January 1986, members of congregations began forming AIDS Care Team® groups who were matched with people from the clinic. These team members became family to the people they embraced. Their presence and assistance declared that people with AIDS were not abandoned by God or God’s people. This was the nation’s first hands-on, non-judgmental caregiving project involving congregations.

Our interest to be a compassionate and reconciling presence for all people touched by or concerned about HIV/AIDS culminated in another landmark event in February 1987. The heads of many faith communities and congregational clergy came together to conduct an AIDS Sabbath Observance that featured four special interfaith services at different locations: a service of reconciliation, a commissioning of those who serve persons with AIDS and their loved ones, a celebration of prophecy and hope, and a community memorial service. Media coverage was extensive. Each service met a particular need and was well attended. The weekend climax was the memorial service at St. Anne’s Catholic Church (Houston) where a full sanctuary of people lit hundreds of candles and publicly mourned 6 years of losses that too often had been kept secret. These special observances continued until 1992 when it was decided that they had fulfilled their original purposes to unite faith communities and persons touched by AIDS, and to counter strident voices that garnered so much media attention.

Comments by some public figures during these years stoked fears of infection and reinforced negative judgments about persons with the disease; most commonly, but not exclusively, men who had sex with men and injection drug users during the first decade of the epidemic. To Shelp and Sunderland, in contrast, they were not to be feared or condemned. They were children of God who typically were frightened, weakened, alone, powerless, and stigmatized. They were not, however, without dignity, hope, and determination. Like many people seized by progressive terminal illness, they responded humbly, enthusiastically, and gratefully to any gesture of care, companionship, and acceptance offered by Shelp and Sunderland or the growing number of volunteers in congregations who befriended and assisted them. 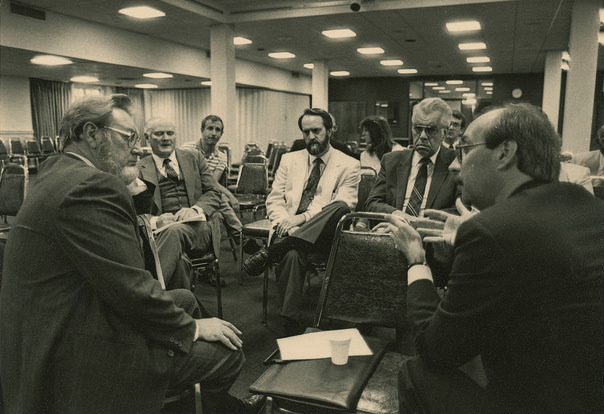 Education was nearly always required before people would respond to a call to care. The first interdisciplinary educational program for clergy and laypeople was held on January 28, 1986 at South Main Baptist Church (Houston). Hundreds of concerned people heard factual presentations by a physician, social worker, attorney, and clergy. This event is remembered by all who attended because the additional news on that day was the explosion of Space Shuttle Challenger.

The next major educational event was May 27, 1988 when Surgeon General C. Everett Koop addressed a capacity audience at the same location. This was an invitation-only event due to security for Dr. Koop: an indication of hostility often directed toward persons with and events about AIDS. He applauded the pioneering response to AIDS by faith communities in Houston and hoped for “networks such as yours to spring up all across the land.” Dr. Koop’s appearance was another indication of the national attention being given to the responses of Houston’s faith communities for which Interfaith CarePartners was the catalyst.

Shelp and Sunderland decided to speak to a broader audience about opportunities for faith communities to be constructively engaged with people touched by AIDS. Their article, “AIDS and the Church,” described AIDS as a challenge to the identity and obedience of people of God. The Christian Century, a respected and widely read ecumenical journal, published the article in September 1986. It was the first article by religious authors to interpret AIDS non-judgmentally and compassionately. National religious and secular attention immediately turned to the AIDS Care Team project and its creators.

These books, additional articles in professional journals and newspapers, national media interviews and stories were complemented by more than 30 invited speeches at international, national, and local conferences from 1986 through 1990. At the same time, more congregations were joining the AIDS Care Team project in Houston. All of this was happening while Shelp and Sunderland continued full-time teaching.

Their writing, speaking, caregiving, and organizing activities also attracted criticism and recrimination. They were increasingly excited about the effectiveness and personal growth of AIDS Care Team members, the blessing they were to the people they served usually until death, and the potential of the Care Team concept to equip congregations to embrace persons with long-term care needs caused by other degenerative conditions. A growing sense of stewardship of what they were learning and a desire not to be distracted by critics led Shelp and Sunderland to incorporate the Foundation for Interfaith Research and Ministry (FIRM) which began operations in September 1988 when Shelp resigned his faculty positions. Sunderland joined him in January 1989. The corporate name was changed to Interfaith CarePartners in 2000 in order to better convey its servant mission.

The transition from the academy to an independent, interfaith servant organization carried risks. Although 22 congregations were participating in the AIDS Care Team project and interest was growing, funding to sustain the new agency in a controversial arena was more in doubt. A few individual donors and Northwoods Presbyterian Church (Houston) provided a total of approximately $12,000 in seed money. This venture capital, a 12-month contract for $88,000 with the Texas Department of Health, and donated office space at Bellaire Presbyterian Church (Houston) were all that was certain as a leap of faith was taken. Individuals, congregations, foundations, community groups, and state and federal contracts underwrote a growing caregiving program of HIV/AIDS services. A leap of faith and belief that “people will take care of us, if we take care of people” were validated.

Congregations and their members continued to answer the call to serve in growing numbers each year through 1992 when 710 new AIDS Care Team members joined existing teams to serve 429 persons with AIDS contributing nearly 112,000 hours of service. Though people served by teams were dying at the rate of about 3 per week, new life-prolonging drugs began to enable people with AIDS to be less dependent on others. As a consequence, the number of persons served by an AIDS Care Team has progressively declined since 1992. As will be explained below, this good news, however, did not mean that the Care Team concept and methods of volunteer caregiving were no longer of value. Sixteen months after the doors of Interfaith CarePartners opened, the first attempt began to embrace and sustain others with similar needs.

Back to the Beginning

This highly selective and abbreviated report of key events in the founding and early years of the Care Team program and Interfaith CarePartners fails to acknowledge all of the people and organizations who had a role in our developing story. This omission does not imply, however, that what has been achieved could have been without their unique contribution. The founders always have seen themselves and the organization as catalysts to bring people together for mutual care. They did not foresee when they began a journey with Jay where each successive step would take them. Shelp answered a call. Sunderland came alongside. From those moments until now, God has blessed a program that provides a structure within which people are enabled to care for one another.

Jay died in June 1989. Some might say that his role in the story ended then. But, in truth, his contribution continues. Relatively few who have been involved in our programs in Houston or where our methods have been used across the country know that Jay’s misfortune was the start of a congregational caregiving movement. His call for a ride were the first words in a continuing conversation about how faith communities can be faithful to their identity and mission with respect to people who are ill or impaired, regardless of the name of the disease or nature of impairment. It is difficult to be grateful that Jay became ill. It is easy to be grateful for all of the good that has been experienced as a result.

Continue Reading: Building on a Foundation

A 3.5 hour highly engaging program specifically for individuals living with early to moderate Alzheimer’s, related Dementia or memory loss. Planned activities strengthen motor and social skills through games, music, crafts, lunch and socialization. Family caregivers receive 3.5 hours of respite, a break and time away from caregiving responsibilities, while their loved one attends each Gathering Place.

A homebound program focused on helping individuals living with illness or other challenges due to aging. An extended family of trained volunteers offers support and companionship for homebound individuals who belong to a partnering congregation. Family caregivers receive respite, a break and time away from their caregiving responsibilities.

A support group established for family caregivers that offer emotional support, encouragement, friendships and helpful tips about self-care and caregiving. Family caregivers caring for loved ones with Alzheimer’s, related Dementias, memory loss or other challenges due to aging may join this monthly support group.

Educational events that connect family caregivers with education and community resources on how to provide quality care to their loved one.

Tune in at noon for our Sweet Charity Event online which recognizes and honors our volunteers and partners, while raising awareness and support to help advance our mission. Click here for more information.

Be sure to also check out our Sweet Charity Auction!